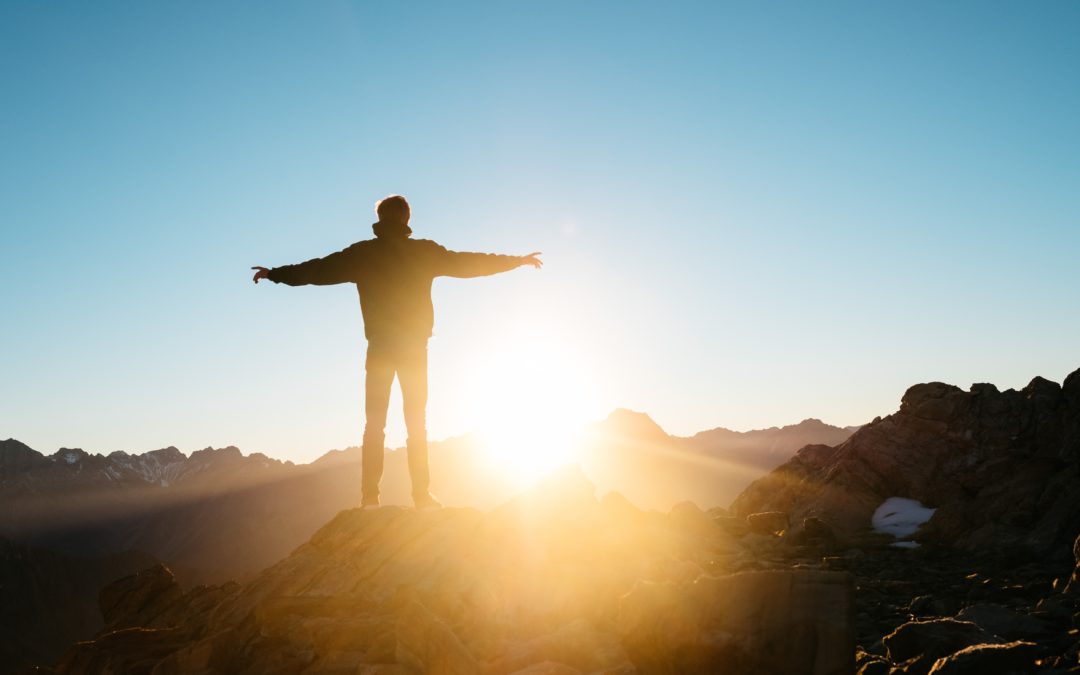 “I have been crucified with Christ. It is no longer I who live, but Christ who lives in me. And the life I now live in the flesh I live by faith in the Son of God, who loved me and gave himself for me.”

Paul gives us a beautiful reminder that, through Faith, we’re all called into a deeply personal relationship with Him that enables us relate to, and identify with, His cross and His resurrection.

By way of His cross, we shed our old rebellious and worldly selves in favor of taking on a new identity in Christ Jesus. Christ becomes the point in our lives, and a catalyst for moving closer to God The Father. In so doing, we embrace His resurrection and inevitably, by grace, our own.

By way of His cross, we’ve been freed from the tyranny of the law of imperfect sacrifice. Before Christ (BC), we had to take the best of what we had, usually in the form of a lamb, and sacrifice it to help atone for our sins. However, these sacrifices weren’t perfect and so they did not perfectly remove the gap (sin) between God an His people. This is why Jesus came. To live perfectly in accordance with the law, in perfect union with The Father, completely without sin. Then, as a perfect sacrifice, He willingly allowed himself to become the paschal lamb and perfectly atone for the sins of man so that we could be restored to The Father in perfect union.

1 Peter 3:18
“For Christ also suffered (death) once for sins, the righteous for the unrighteous, that He might bring us to God, being put to death in the flesh but made alive in the Spirit.”

By way of His perfect sacrifice we are now able, by grace, to move past a life enslaved to sin and instead embrace a new life in Christ Jesus, becoming saints.

Romans 6:11
“So you also must consider yourselves dead to sin and alive to God in Christ Jesus.”

We’re all called to be saints, not just the special people we read about, hear about, or see on TV. We’re all called to live a life dead to habitual sin, and alive in the Spirit growing closer in communion with God. Throughout Scripture, the faithful are referred to as “saints” by the Divine Author.

1 Corinthians 1:1–3
“Paul, called by the will of God to be an apostle of Christ Jesus, and our brother Sosthenes, To the church of God that is in Corinth, to those sanctified in Christ Jesus, called to be saints together with all those who in every place call upon the name of our Lord Jesus Christ, both their Lord and ours: Grace to you and peace from God our Father and the Lord Jesus Christ.”

Psalm 50:5
“Gather to me my faithful ones, who made a covenant with me by sacrifice!”

To be a saint means to be set apart ( Greek=hagios | Hebrew=qadowsh), and in the context of Christian life- set apart for God. Marked for Him, much like how sheep and cattle were marked with their owners seal, or “branded”. What does this mark or seal look like? Think about the vows we take in Baptism. The very NOT-symbolic covenant we enter into with God by declaring our lives, or our children’s, as His. We reject the lord of this world and instead willingly choose to accept the free invitation of communion with God’s chosen, His Church, as saints. CCC 946

2 Corinthians 5:17
“Therefore, if anyone is in Christ, he is a new creation. The old has passed away; behold, the new has come.”

In Baptism, we’re literally made into a new creation. CCC 1265 declares we become a “new creature” as an adopted son of God and partaker in the Divine Nature. Baptism washes away the stain of original sin, the anchor of sin nature, so that we may be freed to live a life in the Spirit as Christ did. The Baptism of Water begins a process of resurrection which culminates in the Baptism of Fire (Baptism of The Holy Spirit) which is a response to the covenant we made with God. The scope of this post isn’t to discuss the Baptism of The Holy Spirit, but it is an essential part of Christian transformation.

Colossians 2:12
“Having been buried with Him in Baptism, in which you were also raised with Him through Faith in the powerful workings of God, who raised Him from the dead”.

After Baptism, as a new creation and adopted son of God, a change occurs in our response to the world and to God. Like Paul, we declare that “Christ lives in me” which expresses the perfection of Christian life (NJBC1). This isn’t a statement simply expressing psychological motivation, such as “living for God”, because Faith in Christ doesn’t substitute a new goal of action. Instead, it provides a new principle of activity on an ontological level, or at the core of our being. A symbiosis between the Christian and Christ who, through His resurrection, has become a life-giving Spirit.

We’re given new life, a new identity, and a new principle which motivates our being. This is made manifest through the indwelling of Christ Jesus in our hearts/minds. For His love for us, and our love for Him, becomes our new principle.

Ephesians 3:17-19
“So that Christ may dwell in your hearts through faith—that you, being rooted and grounded in love, may have strength to comprehend with all the saints what is the breadth and length and height and depth, and to know the love of Christ that surpasses knowledge, that you may be filled with all the fullness of God.”

“If Christ Jesus dwells in a man as his friend and noble leader, that man can endure all things, for Christ helps and strengthens us and never abandons us. He is a true friend.”
St. Teresa of Avila

So, through the freedom won by His perfect sacrifice on the cross and the vivifying presence of His resurrection in Baptism, we take on a new nature and purpose. We begin developing a personal relationship with Christ Jesus to grow closer to Him and know Him, so that we too may become like Him, and partakers in His Divine Nature. Theosis.

I leave you with this:

Romans 12:1-2
A Living Sacrifice
“I appeal to you therefore, brothers, by the mercies of God, to present your bodies as a living sacrifice, holy and acceptable to God, which is your spiritual worship. Do not be conformed to this world, but be transformed by the renewal of your mind, that by testing you may discern what is the will of God, what is good and acceptable and perfect.”

All Scripture verses taken from the ESV, (c) Crossway Publications

Good, purified, hearts and minds provide good fruit, like the kind Jesus mentions in Luke. In other words, good fruit comes from good soil. Our hearts and minds are like soil, and how fertile that soil determines how good the fruits in our life can be.

The advice here seems self-explanatory: “don’t take advice from wicked people”. Yet, many of us, myself included, have found ourselves doing just that.

The Fire of God

“Do whatever he tells you.”

I believe this is the stuff of nightmares for Satan, that Christian disciples come to know who they are in Christ Jesus, that they’re children of The Father, and blessed by the Holy Spirit to go out and spread this good news in power.

Today's first reading is 1 John 3:22 - 24:6 and in reading it I found something poetic about today being just a regular Monday after Epiphany. Here's the reading: "…and whatever we ask we receive from him because we keep his commandments and do what pleases him. And...
More