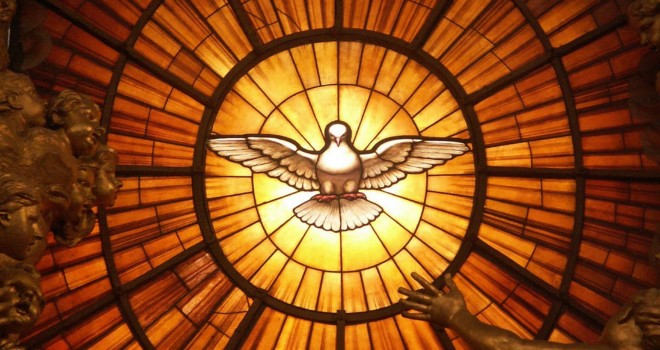 I was excited, after finally posting an article on Theosis, to see that the readings this Sunday include the above Scripture. There’s something powerful about a Christian who knows who they are, and what they have. That they’re called and gifted. Not a very subtle reference to Sherry Weddell’s book.

I believe this is the stuff of nightmares for Satan, that Christian disciples come to know who they are in Christ Jesus, that they’re children of The Father, and blessed by the Holy Spirit to go out and spread this good news in power. Satan trembles when disciples are activated. Yet another terribly shallow nudge towards another good book by Jeff Cavins called “Activated Disciple”. Highly recommended.

Let’s look at the first part of the passage, verses 1 – 3. While mostly self-explanatory, it’s good to point out ‘why’ Paul is even writing this letter and we can see that in verse 2. The Corinthians were previously under the influence of pagan beliefs and Paul didn’t want them to be swayed by false teachings, he wanted them to clearly understand the true manifestations of the Holy Spirit.

The next set of verses, 4-6, are a Trinitarian reference to God, the relationship of gifts, service and empowerment, and acknowledging that there’s a variety. Elsewhere, it’s suggested that perhaps the Corinthians were a little obsessed with the gift of tongues, and so Paul is saying “hey, there’s more here than just that, c’mon now”. The gift of tongues is the least of the gifts, according to Paul, for it doesn’t build up the Church, but the individual. It’s mostly a personal gift for worship and prayer.

Verse 7 is a simple declaration of ‘why’ we are given gifts. To build the Church.

Now, with verses 8 – 11 we’re finally looking at the gifts Paul has identified. For the sake of brevity here, I’m going to use the summary definitions in Sherry Weddell’s book ‘Fruitful Discipleship”.

1) Wisdom – a revelational gift that empowers disciples to be a channel of God’s goodness through remarkable insight.

2) Knowledge – Empowers disciples to be a channel of God’s truth which enables us to better understand God, ourselves and the universe.

3) Faith – Empowers disciples with an unusual trust in the love, power and provision of God and a remarkable freedom to act on this trust.

4) Healing – Empowers a Christian to be a channel of God’s love through whom God cures illness and restores health in a miraculous way.

5) Miracles – Empowers disciples to a vessel of God’s power. the Greek phrase “energemata dynameon” literally translates “workings of powers.” The double plural most likely means that these gifts were diverse and bestowed at various times and circumstances.

6) Prophecy – Empowers disciples to be a channel of divine truth and wisdom by communicating a word or call of God to individuals or a group through inspired words or actions.

7) Discernment of Spirits – Empowers disciples to be an effective channel of God’s wisdom by accurately perceiving a divine or demonic presence in certain people, places or things.

8) Tongues – A personal prayer language some are given which can reveal God’s plan for that person, and through them a community. Also helps in docility to the Spirit in worship.

9) Interpretation of Tongues – Sometimes God speaks to an individual, for others, in their prayer language which then requires an interpreter for those in attendance to understand. In that moment, God empowers a disciple to interpret that message.

It ends with Paul acknowledging that not all are given all the gifts all the time, but instead “apportion(ed) to each individually as He (Spirit) wills.”

In prayer, ask God to show you His plan for you. Where’s your place at the table, what’s He calling you to? What gifts has He graciously bestowed upon you to help build His kingdom? Open your heart to Him, let Him answer and affirm you.